Industrial Internet of Things (IIoT) is changing the industrial landscape rapidly. To stay competitive and make the right decisions industry’s leaders need to understand the potential of IIoT and to be informed. This is one of the reasons why Right Relevance in collaboration with IIoT World analyzed the trends and identified Top 50 IIoT Influencers. The IIoT Communities were detected using two graph algorithms. For sub-graphs, Right Relevance used Neo4j & R. Graph visualizations are done via Gephi.

The report leverages tweets sampled from June 1st to June 15th, 2017, and along with Right Relevance topics, topical communities and articles data form the basis for the analysis.

This report is a summary of graph analysis of engagements and conversations including retweets, mentions and replies of tweets related to the subject of ‘Industrial IoT’. The phrase used for gathering tweets is “iiot”. Most of the summary report is extracted from the analysis collateral in the form of tables and graphs.

Top 30 IIoT Influencers around the World

The first two lists represent the top 30 accounts listed by PageRank & Overall measures. Top overall influence is measured by combining the quantity of connections (Retweets, mentions, replies), the quality of the connections (measured by Page Rank) and the reach of the users tweets. These are adjusted to discount the skew towards users with a very large number of followers (often referred to as becoming ‘viral’).

The following accounts are in the top 30 IIoT Influencers as in the previous report: ThingsEXPO (@ThingsExpo), Predix (@Predix), David Oro (@DavidOro), Scott Amyx (AmuxIoT), IoT One (IotoneHQ) and Ludmila MorozovaBuss (TopCyberNews). A majority of these accounts are part of the most highly engaged community visualized in the graph (Purple). 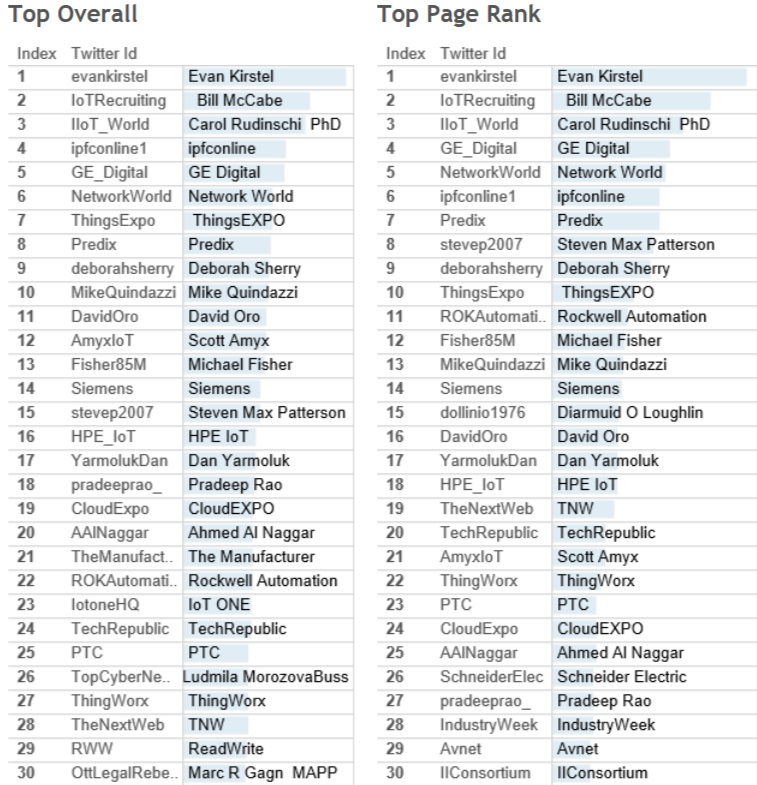 IIoT_World has been moved up appreciably. In the last two months, it moved up to 3rd place in Top Overall from place number 32. Also, GE Digital has moved from position number 29 to position number 5.

Who are top 10 IIoT Influencers and why?

What is interesting from this top is that 30% of top 10 IIoT voices in June 2017 are from GE Digital. Other 30% are represented by media and 40% from people with excellent marketing skills. What about big players focused on delivering Industrial IoT solutions/products?

Things changed in regards to top connectors too, compared to the previous report on IIoT. @IIConsortium, the top connector in March, doesn’t qualify in Top 30 connectors now.

Evan Kirstel (@evankirstel) is top 1 connector in the first two weeks of June. The second top connector in the World is @IIoT_World, followed by @IoTonSteroids, which has tweeted/retweeted more than 24 000 tweets, the number of followers being still low (under 500). @OttLegalRebels is prominent here as it has built up influence and value as a news and information hub.

@ipfconline1 seems to be constant as the agency was listed in the previous report too. @GE_Digital  and @Konecranes are new appearances in this top. Konnecranes is the account of a world-leading group of Lifting Businesses™ serving manufacturing and process industries, shipyards, ports, and terminals.  @IotoneHQ is the account of a leading global platform for connecting Industrial IoT, @iotworldnews is the official account for the world’s largest IoT event series #IoTW17 (US) & #IoTWE (Europe).

@PTC, @IIoT_Viewpoints, @IIoT_daily, @shyamvaran, @Fisher85M, @kai_at_ProSyst, @mclynd, @BoschSI, @pradeeprao_, @HPE_IoT, @SAPLeonardo, @automationworld and @iotagenda close the Top 30 of IIoT connectors. @RalphRio from ARC web is not in the list anymore, but @IIoT_Viewpoints, which is the Twitter account for ARC Web blog is now listed as a connector. Some of the publications that appear in this table are listed due to their recent events where a lot of people attended and mentioned these accounts. The value of this measure lies in that it bubbles up accounts with potentially real influence regarding news and information dissemination on this subject.

Users connectedness is measured using an algorithm called Betweenness Centrality. This measures how well a user is connected to all other users compared to everyone else. Right Relevance among the other three classifications (Top Overall, Top PageRank, and Top Connectors) recommend high interesting profiles. The Interesting metric finds smaller users who made a relatively high impact. It compares how well a user does in the overall ranking compared to how well they would be expected to do given the number of followers they have.

Steven Max Patterson (@stevep2007), a tech journalist, is in top 10 interesting profiles. Some big players in the industrial market like Rockwell Automation (ROKAutomation), @Schneider Electric, @PTC, @ThingWorx (a PTC business and an award winning IoT solution) or @Avnet are in this top too. Also, IIConsortium is part of the list and the following publications: TechRepublic (@TechRepublic), Industry Week (IndustryWeek) and The Manufacturer (@TheManufacturer). The engagements or “flocking” in the context of a subject (topic, event, etc.) can lead to the building of temporal communities with local influence that is not obvious by the standalone influence of the individuals or without the context of the event. The subgraphs aka communities formed by applying community detection graph algorithms are termed as ‘Flocks’. 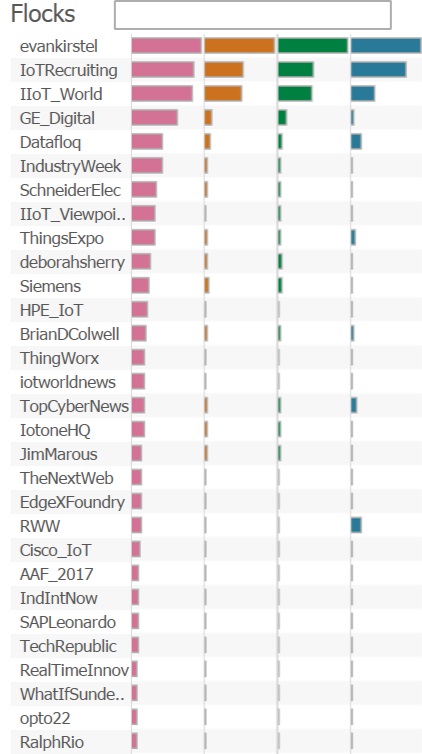 To have access to the full data in an interactive way and to download the top 50 IIoT influencers Report and we will also give you access to Tableau Online Dashboard to visualize graph analysis results via charts and tables. Insights include flocks, top trending terms, top hashtags, top Users/accounts, RR topics, top tweets and several other measures. Faceting is supported per flock, RR topic and Twitter/RR account.

One high engagements area (in Purple) is leading to a community around accounts that are mostly industry analysts, thought leaders, publishers, news curators, etc. Analyzing this graph is easy to understand how Industrial IoT players collaborate to spread their messages via Twitter. Reasonably well-engaged community (in blue) is centered around IoT One (IotoneHQ). There are some interesting and consistent IIoT communities formed around @Ludmila MorozovaBuss (@TopCyberNews) and TechNative (@technative) (in orange), IIoT/I4.0Viewpoints (@IIoT_Viewpoints) – in yellow, and like in the previous report, around (@ThingsExpo) and CloudEXPO (@CloudExpo) conferences (in green).

Many companies have clear and cohesive communities of their own but are not well connected to each other. These are GE Digital (in green), HPE IoT, Rockwell Automation (in gray) Schneider Electric (in yellow), Siemens (in gray) or Caterpillar, SAP Leonardo (green) or IBM Watson IoT, Deloitte & PTC. 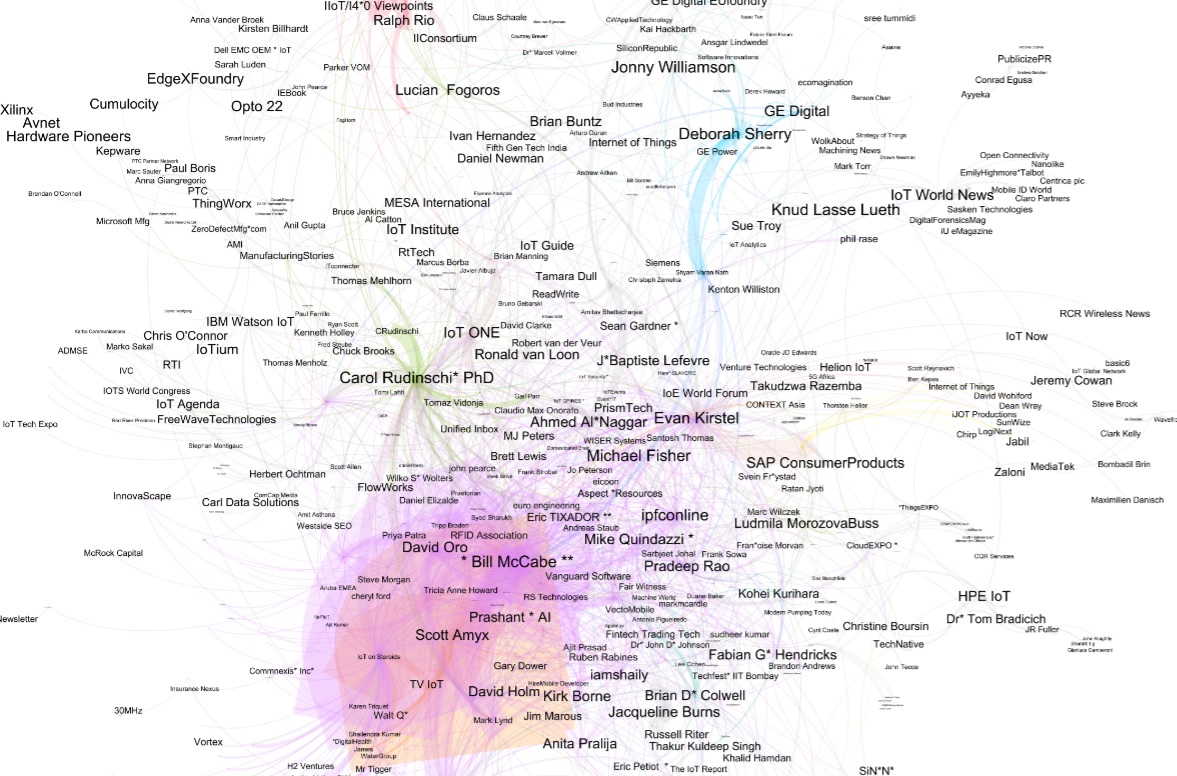 There are several more IIoT communities that are outside the scope of this report. Please contact biz@rightrelevance.com for details.

IIoT World™ is the first Global Digital Publication dedicated 100% to Connected Industry, Industrial Internet of Things, Industry 4.0.
Our associates are handpicked with one characteristic in mind: digital transformation DNA and draw from the insights, hands on
experience of the world’s best newsrooms & industrial enterprises to deliver content and coverage across a wide range of industry
categories.

IIoT World™ combines journalistic coverage with data analysis to expose the stories, players, trends and innovations that shape the IIoT. 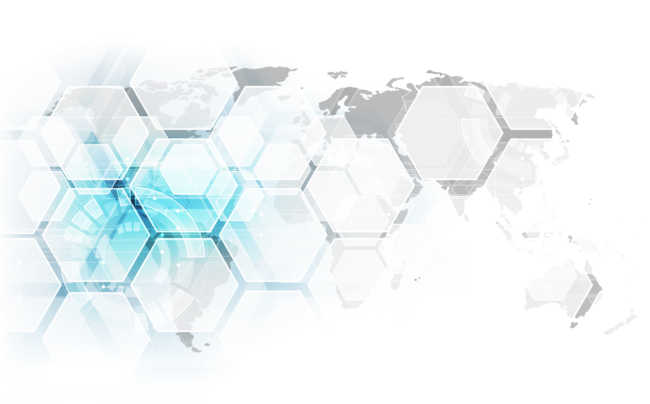 Is IIoT Living on the Edge in Industrial Environments?

Given the hype about IIoT, the ARC Advisory Group asks if it is really time to focus on the edge. The promise of edge computing in industrial environments means getting the right device data in near real-time to drive better 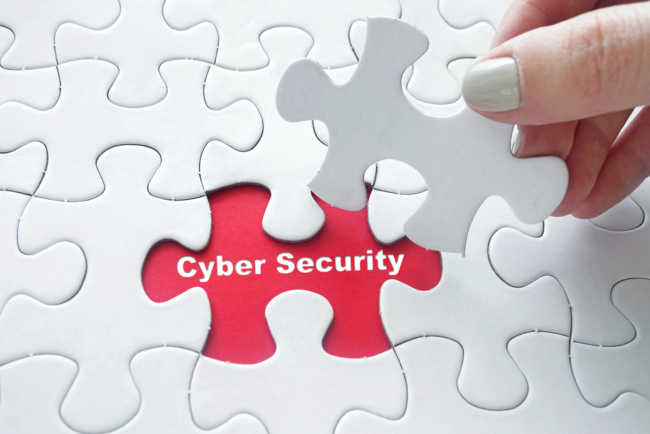 This year was one of the most intense in terms of cybersecurity attacks affecting industrial control systems. For the first time since Stuxnet, a malicious toolset called CrashOverride/Industroyer targeted physical systems. The WannaCry and Petya attacks appear to have changed